A look at the women who brought R. Kelly to justice

R. Kelly faces decades in prison after he was convicted of racketeering and sex trafficking charges.

Behind the downfall of R. Kelly stand dozens of women who helped bring attention to his crimes and those who helped prosecute him.The three-time Grammy Award winning R&B singer is now facing decades in prison after he was convicted of racketeering and sex trafficking charges on Sept. 27. Kelly’s attorney, Deveraux Cannick, told CNN he was “disappointed” by the verdict and that Kelly’s team would consider filing an appeal.For nearly five weeks before his conviction, jurors heard testimony from people who were in Kelly’s inner circle at different points in the singer’s 30-year career. Some former associates testified that Kelly directed them to hand out slips of paper with his phone numbers on them to women at shows or that they ran into at public outings. And several women testified that receiving those slips of paper was how they were able to get in touch with the singer and were slowly lured into his world.

R. Kelly convicted of racketeering and sex trafficking by a federal jury in New YorkTestimony from several women who interacted with the singer often gave the deepest look at Kelly’s actions. Some women testified they were sexually abused by the singer as minors. Others said that they were required to ask for permission to leave rooms, even to use the restroom or get food.Kelly pleaded not guilty to all charges against him and did not testify in his own defense. His defense team painted the testimony of many who have spoken out as inconsistent and questioned their motives.

The survivors and women who told their stories

The effort to hold Kelly responsible for his actions began decades before his Brooklyn federal trial this summer, in a 1996 case that was reportedly settled out of court.

He faced child pornography charges at a state trial in Chicago in 2008, where he was acquitted. Lisa Van Allen testified in Kelly’s 2008 Chicago trial. After Kelly was found guilty on Monday, 13 years later, she told ABC’s “Good Morning America” the verdict was “what I was looking for back in 2008…I believe that the difference is this time is that there is power in numbers.”Jerhonda Pace, Azriel Clary, Faith, Stephanie, Sonja — these are just some of the women who took the witness stand at Kelly’s federal trial. Some of them testified using pseudonyms or only their first names, in part to protect their privacy and also because of concerns over their safety.Faith testified about threats she faced after speaking publicly about her experiences with Kelly. She said she was in a New York City theater that was evacuated as the Lifetime series “Surviving R. Kelly” was about to premier. She also said she was threatened with the release of explicit photos of her after filing a lawsuit against the singer.The first witness to testify in the trial, Jerhonda Pace, said in an Instagram post after Kelly’s conviction that she was “trolled” for speaking out about abuse by Kelly. She testified that Kelly sexually abused her when she was 16 and once choked her until she passed out. Cannick said the singer denied ever having a sexual relationship with her and called her a stalker in his closing arguments.”People called me a liar and said I had no proof,” Pace said. “Some even said I was speaking out for money. Speaking out about abuse is not easy, especially when your abuser is high-profile.”

A timeline of the case against R. KellyAzriel Clary, who testified under the pseudonym “Jane” at Kelly’s trial, spoke to CBS’s Gayle King on Thursday about how difficult it was to testify against Kelly.”It was very disturbing to have to relive those moments,” Clary told King. “A piece of me was happy because I felt like this person no longer has control over me. You don’t tell me what to do and what to wear and where to go and how long to be in a room anymore.”Clary told jurors that she met Kelly when she was 17 years old, that he sexually abused her and often kept her confined in rooms and on a tour bus. Initially, she defended Kelly after his arrest but testified that it took her several months before she was able to recognize that she was being abused and leave the singer.The stories of abuse have come to light in the past several years, in part because of the women who organized a movement called #MuteRKelly in 2017 — Kenyette Barnes and Oronike Odeleye. Odeleye and Barnes said in a statement to CNN that his conviction “speaks to a seismic shift in accountability.” Barnes wrote in Time Magazine, shortly after Kelly was convicted, about what it took for Kelly to finally be “muted.””We wanted people to stop claiming they could separate the man from the music. We wanted to provide a global platform for survivors, activists and those who have been silenced for decades to feel seen and heard,” Barnes wrote. “We wanted accountability. We wanted to change the narrative for Black women and girls, to tell them that they are credible victims of sexual violence, that Black girls are to be believed, and protected, and supported.”dream hampton, who was an executive producer for the “Surviving R. Kelly” documentary, and helped shine a light on multiple women’s claims of abuse, wrote about how difficult it was for survivors to sit down and publicly share what happened to them. Once the series aired, many of them, like her, needed security to protect them against threats from Kelly’s supporters, she said.”It’s brave women like the ones I spoke to, not Kelly himself, who are centered in my thoughts in this moment,” hampton wrote in a Washington Post opinion piece after his conviction. “Elevating their voices was a start; hearing them out was the very least we should do. But neither this — nor Kelly’s long-overdue conviction — should be the end of the story.”hampton said it is now “time to focus on the safety and future of survivors” and called for a fund to help Kelly’s survivors pay for mental health care.After Kelly’s defense team repeatedly attacked many of the female accusers during the singer’s trial, questioning why some waited so long to report abuse to authorities, prosecutor Nadia Shihata described how difficult it was for many of them to take the stand.”Some put on a strong facade but eventually broke down. Some got frustrated and upset. Many of them were ashamed and embarrassed,” Shihata said. “It was often difficult testimony to listen to. But, you know what? As difficult as it was for all of us to hear, it was far worse for them to experience and relive.”Kelly still has several cases pending — a federal child pornography and obstruction case in Illinois, an Illinois state case involving aggravated sex assault charges and a state prostitution case in Minnesota.Kelly has denied the allegations.

As the jury read its verdict on Sept. 27, a table full of prosecutors from the US Attorney’s Office for the Eastern District of New York sat nearby — all of them women.The office’s case against Kelly was led by Assistant US Attorney Elizabeth Geddes, chief of the Civil Rights Section of the Criminal Division. Geddes spent much of her 15 years with the Brooklyn federal prosecutor’s office working on complex organized crime cases, including multiple mob-related cases, spokesman John Marzulli said. 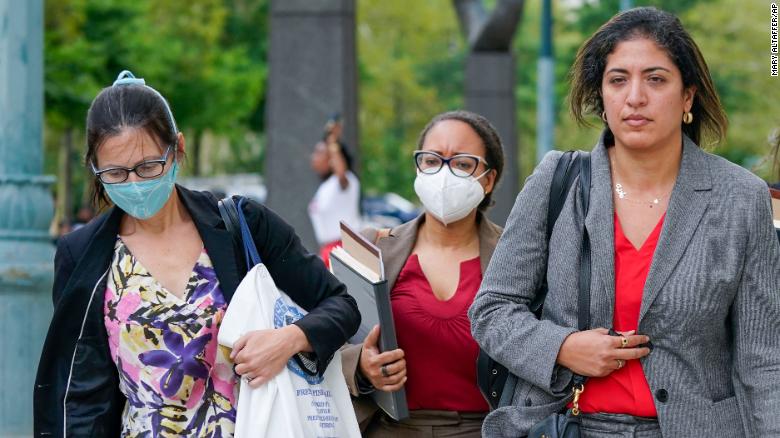 Assistant United States Attorneys Elizabeth Geddes, left, Maria Cruz Melendez, second from left, and Nadia Shihata, second from right, leave Brooklyn federal court on Thursday, Aug. 19, 2021.Shihata, chief of the Organized Crime and Gangs Section at the office, previously worked as a war crimes prosecutor in The Hague. She also led an investigation into the sexual abuse of female inmates at the federal detention facility in Brooklyn that resulted in convictions of former high-ranking officers from the prison, Marzulli said.Maria Cruz Melendez is the deputy chief of the Civil Rights Section of the Criminal Division, and has prosecuted cases involving organized crime, gangs and terrorism, Marzulli said.Outside of court after Kelly was found guilty on Monday, Acting US Attorney from the Eastern District Jacquelyn M. Kasulis said the conviction could not have happened without the “bravery and resilience” of survivors, and praised the team of prosecutors for their “grace under pressure.”

Richard Hamming’s 14 Lessons For Success (As A Scientist)

You have Successfully Subscribed!

We use cookies on our website to give you the most relevant experience by remembering your preferences and repeat visits. By clicking “Accept”, you consent to the use of ALL the cookies.
Cookie settingsACCEPTREJECT
Manage consent

This website uses cookies to improve your experience while you navigate through the website. Out of these, the cookies that are categorized as necessary are stored on your browser as they are essential for the working of basic functionalities of the website. We also use third-party cookies that help us analyze and understand how you use this website. These cookies will be stored in your browser only with your consent. You also have the option to opt-out of these cookies. But opting out of some of these cookies may affect your browsing experience.
Necessary Always Enabled

Performance cookies are used to understand and analyze the key performance indexes of the website which helps in delivering a better user experience for the visitors.

Analytical cookies are used to understand how visitors interact with the website. These cookies help provide information on metrics the number of visitors, bounce rate, traffic source, etc.

Advertisement cookies are used to provide visitors with relevant ads and marketing campaigns. These cookies track visitors across websites and collect information to provide customized ads.

Other uncategorized cookies are those that are being analyzed and have not been classified into a category as yet.